The pictorial world of Elisa Zadi

it is unmistakable and dictated by a particular expressiveness capable of highlighting the emotional element beyond the represented image; it is an intimate journey into the essence of the self aimed at grasping the nuances of the senses and the manifestations of the soul; it is an investigation that takes the viewer from the objective realities of the world into the isolated and mysterious dimension of introspection; it is the attempt to make the artistic gesture a creative act that manipulates the image with expressionistic plays of color to the point of capturing that human spirituality lost over time. As in a game of mirrors, the artist tells about herself through what the canvas and the tools of the trade allow him to communicate, wrapped in meditation and in the intuitive impulse of contemplation. In her path Elisa Zadi became a painter and performer, combining the majestic pictorial technique with the scenographic and eclectic vitalism of aesthetic theatricality, giving the world the unrepeatable possibility of immersing herself in human disturbances, in an exceptional catharsis that look purifies from the usual way of feeling and perceiving the surrounding existence. In his performances the natural and human world enter into a mystical symbiosis such as to arouse in the viewer a unique and unrepeatable sense of catharsis. By varying from place to place, Elisa Zadi's performative actions are in tune with the surrounding environment, making the space and time of the action an overwhelming and introspective unicum. The gestures, the declamations, the tools and the props take part in a sort of theatrical act, in which the artist becomes the protagonist and spokesperson of a message to be expressed not only with painting but with his whole body. The mysticism that pervades the action forces a direct dialogue with the Universe and its secrets. The artist becomes a poet and a priestess who has the arduous task of leading the viewer to the discovery of what the eyes cannot grasp, of what exists beyond the appearances of existence and of what lies beyond life. Intimate and profound, Elisa Zadi's performances investigate the aporias of collective consciences, re-establishing the natural harmony lost in contemporary society, rediscovering myths and ideologies lost over time but still living in the sensitive soul of the one who still has the courage to touch earth with your hands and get dirty with what the existing gives us moment by moment. Laura Monaldi 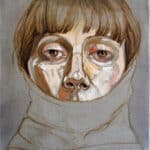